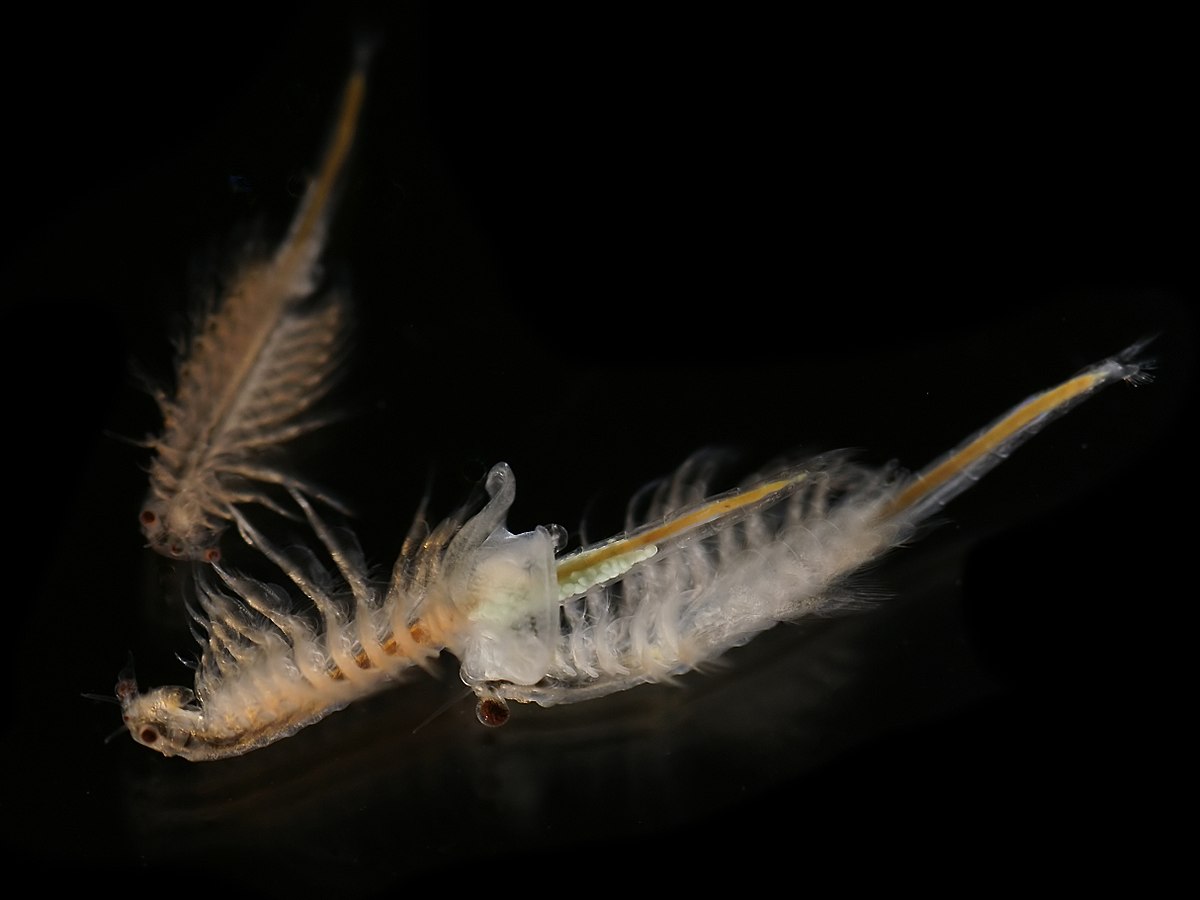 Sea-Monkeys – Do these really exist ? Yes, they do thanks to a Mr. Harold van Braunhut, except that they are not monkeys. He popularised the use of brine-shrimps as part of a water purifier. He did this in 1957, and gave the name Sea-Monkey to brine-shrimps in 1962. (Read all about it here.) They are also known as Aqua Dragons. Brine-shrimps or branchiae-legged crayfish (=crayfish with gills on their legs), refer to species of the genus Artemia. Artemia spp. belong to the phylum Arthropoda, the class Branchiopoda, the order Anostraca, and the family Artemiidae.

As a group, Artemia spp. occur in most of the world: Africa, Asia, Europe, Latin America, and Australia. It’s an old group, evolutionary speaking, having lived together with dinosaurs 100 million years ago. A. spp. are tiny, about 10 mm long, some up to 20 mm. Their biology is interesting. One species, A. parthenogenetica, can reproduce without males present. Eggs can survive for years in a dried state to hatch later, a phenomenon known as cryptobiosis.

However, this blog is not about details of the biology of such species, however interesting. If you’re interested in that there is plenty of information on the internet, for example the page on A. salina in Wikipedia, or the one on Sea-Monkeys. There is also a website dedicated to Artemia: Artemia World (a company dealing in Artemia products).

This blog is about the importance of biodiversity, more specifically, for the well being, if not survival, of us, human beings, directly or indirectly. So how do we relate to these small crayfish?

According to Artemia World, brine-shrimps were in the past used as food by a/o American Indians (notably in Utah, where they were found in Utah’s Salt Lake), and Arabs, who made a paste out of brine-shrimps caught in the Nile, this being known in both cases as delicious food.

Nowadays Artemia is exclusively used as fish fodder. In the more recent past, this was mainly for aquarium enthusiasts. According to Artemia World, A. spp. are good as aquarium fodder during all three phases of their life cycles, as eggs, as larvae (the so-called Nauplius larva), and as adult. The phenomenon of cryptobiosis makes storage of Artemia-based fodder very convenient. Eggs (or cysts) can be stored long term if kept dry, and still provide living fodder later.

Where Artemia really has an impact though is in aquaculture. It is used on an industrial scale to feed prawns, crabs, hermits and lobsters. Artemia World also writes that a boom in the 1970s of marine culture of “evrigalin” salt-water fish in the mediterranean was based on A. spp. (But I could not find what “evrigalin” refers to. If anybody knows? ….) There are a number of websites of companies that sell Artemia products and give details on nutrition value and the like (including Artemia World).

Based on Artemia World’s information, the use of Artemia as fish fodder also impacts on conservation: (young) sturgeons who no longer live in conditions that allow reproduction and living due to hydropower plants and other artificial dams, can be fed Artemia in special pools. When they are strong enough, the young sturgeons can be released in their natural environment.

In addition, Artemia is used as a species to test the toxicity of chemicals. However, according to Wikepedia, it has gained that use despite the fact that it is a very resilient species, and is therefore not a sensitive indicator species.

Brine-shrimps or Sea-Monkeys then, have quite an impact on human life and economy, and also play a role in conservation and environmental control and monitoring.

Artemia salina – To be or not to be

Sea-Monkeys may exist, but the situation concerning the existence of Artemia salina is somewhat confusing, and to what precisely Sea-Monkeys refer is not clear either. A. salina as a species can be readily found in the online and continuously updated Catalogue of Life, and the data portal Global Biodiversity Information Facility. Yet, Artemia World says that A. salina has been declared extinct and that now only seven other species of Artemia exist (A. tunisiana, A. species, A. franciscans, A. parthenogenetica, A. sinica, A. persimilis, and A. urmiana). It’s a bit strange, especially with the additional information that of the seven species that now exist one would be called A. species! This is probably because of a map that lists A. sp. In Kazakhstan:

The Catalogue of Life lists in addition to the species listed by Artemia World A. monica, A. gracilis, and A. tibetiana, and also lists A. salina (sic!). The Catalogue of Life is continuously updated, so it’s probably better to follow the listings there. Artemia World also writes that Sea-Monkey is a name given to a large-size “commercial” form of Artemia, also referred to as Artemia NYOS, developed by the no longer existing New York Ocean Science laboratory, and which is not accepted as a separate taxon.

This discussion on whether A. salina does or does not exist, of to what Sea-Monkeys precisely refer to, is relevant to the extent that this humble but useful crayfish has recently been studied to understand better an other phenomena that affect humans (and other organisms) worldwide: ocean currents. The fact that it has been studied, would imply that the species is not extinct. This contradictory state of information may be the result of recent reclassifications perhaps, but, if so, I did not get that information from the Catalogue of Life.

A. salina itself does not live in the sea. It lives in inland salt water bodies (another element that makes the term Sea-Monkey for this species confusing, as it normally does not live in the sea!). A. salina has been studied as a proxy for numerous other small sea-dwelling organisms, including other Artemia species and a/o krill. Monica M. Wilhelmus and John O. Darbin of the California Institute of Technology, USA, studied the movements of A. salina in water tanks. Sea-monkeys make daily movements, as lots of other small organisms in the sea do. During the night they are closer to the surface than during the day. The two researchers studied the upward migrations using high-speed cameras and microscopic silver-coated glass spheres. Popular Science which discusses this research posted also a video where you can see the movement and the effects it has on the water column. Whereas each shrimp has only a tiny effect on the water, the combined effects of large numbers of crayfish swimming upwards, has a measurable effect on the water column: they generate a current that is stronger than the sum of those created by each individual. The researchers think that the collective action can be powerful enough to influence broad circulation patterns. In the words of Popular Science:

… if other small sea creatures influence water flow in similar ways, it could mean that together they add a trillion watts of power to the ocean’s currents. That means that even the most minuscule organisms could drive the distribution of salt, nutrients and heat throughout the oceans, and they may even influence climate.

In the words of the original article:

(…) We hypothesize that the evolution of Kelvin-Helmholtz instabilities at the boundaries of the intermittent jets within a DVM could trigger Rayleigh-Taylor instabilities across surfaces of constant density and the formation of internal waves along those surfaces. Both processes could potentially result in large mixing eddies, which may explain previous findings of density overturns after krill migration in the ocean. (…)

Biodiversity manifests itself in a myriad lifeforms, which exist in a myriad of different ways. Whereas through ecological studies we know and think to understand many systems, research like this shows that we still do not know everything, and do not yet understand the many different systems and how they different species interact with each other and with the inanimate landscape elements. Tinkering with systems you do not completely know and understand can be hazardous. We are now entering a phase in Earth’s existence where we tinker with one of the most basic of systems that determine how we live, the climate. As the research above shows, we still do not completely understand the complex systems that determine our climate, and probably never will completely understand such systems. Tinkering with the climate looks more and more a hazardous game.