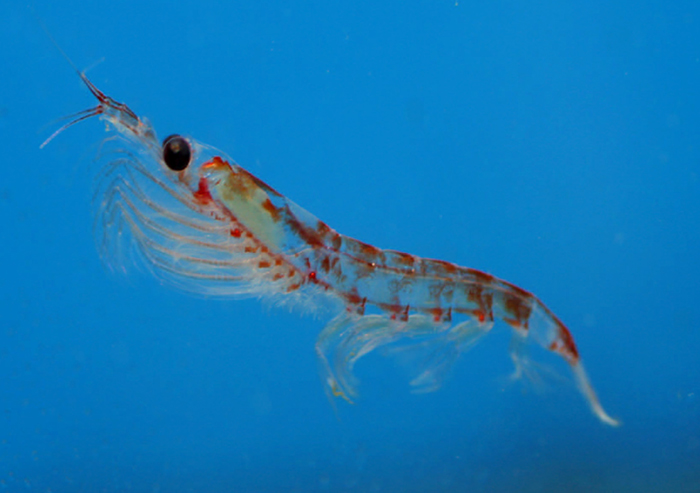 Living in the Southern Ocean, these small crustaceans generate an enormous biomass that sustains a wealth of antarctic fauna, as well as human economic activities

The International Hydrographic Organization (IHO) has not yet formally published its 2000 draft definition of the existence of the ocean and of it being south of 60°S due to global ‘areas of concern’ such as the Sea of Japan.

Pending the IHO’s official description, this post is about a species that calls the Southern Ocean its home and which is single handedly responsible for feeding many impressive mammal and bird species: whales, seals, squids.

That species is Antarctic Krill or Euphausia superba. It is in fact one of 89 species of krill, which is subdivided over two families, the Bentheuphasiidae and the Euphausiidae. The latter family consists of crustaceans that look like shrimps. Krill as a group is widespread, occurring in many open seas, including the Pacific Ocean, the Indian Ocean and the Gulf of Oman. But this one species, E. superba, is the most abundant, living in large schools or swarms in the Antarctic waters between the continent and the polar front, generally within depths of 100m or less. It is estimated to reach a biomass of 500 million tonnes and in that respect thought to be the most abundant animal species on the planet.

What a biomass of 500 million tonnes can do

Details on the life of krill or more specifically E. superba, can be found on many places on the Internet, such as here, here, or here. In this post I want to highlight the ecological role of krill, and specifically that of E. superba. Krill are not the lowest level of the food chain, but one step above it. They feed on phytoplankton — floating, mostly single cell plants. The many species of phytoplankton are the primary producers, capturing sunlight and converting it into energy. Surprisingly, the next step after Antarctic krill can be huge mammals, baleen whales, including the Blue Whale, Balaenoptera musculus, the largest animal currently existing on the planet. The Blue Whale does not live from E. superba alone. Among the other krill species it eats are Euphausia crystallorophias, E. pacifica, E. valentini, Meganyctiphanes norvegica, Nematoscelis megalops, Nyctiphanes australis, N. simplex, Thysanoessa inermis, T. longicaudata, T. longipes, T. raschii, and T. spinifera.

This seems a simple enough food chain. In three steps from tiny sunlight absorbing plants to the largest animal on the planet. Although that in itself is amazing enough, food relations are rarely that simple. For one, the Blue Whale itself — although largely dependent on krill — eats different species depending on where it is, in the Southern Ocean, or the Pacific, or elsewhere. And then, other species eat E. superba as well, and are themselves eaten in turn. Food chains form food webs.

We as a species belong mainly to the last group, and it happens in two ways. The first way is we fish krill directly using most of it as fodder. The fodder sustains aquaculture and other industries, which feed us. (A small portion of the krill we catch is used for direct consumption and that is why we also belong a little to the group of animals that rely on E. superba (and other krill) directly.) The second way is we catch fish that feed on krill.

Fish catches are much more modest, at least at the end of the previous century. The Wikipedia entry on the Southern Ocean refers to fisheries on krill and fish amounting to almost 120,000 tonnes between mid 1998 and mid 1999. Of this, 85% was krill, and 14% was the Patagonian Toothfish Dissostichus eleginoides. Both krill and Patagonian Toothfish are subject to regulated fisheries, where operators follow CCAMLR regulations and conservation measures, and unregulated ones.

Euphausia superba and us

From the above, it follows then that this small crustacean is of great importance. The significance this one species has for our existence is aesthetic and spiritual, economic, and survival.

The aesthetic and spiritual (in the sense of taking joy or pleasure from being in nature and experiencing it) significance is by far not negligible. Maybe it’s not krill itself that evokes this, but surely many of the species that rely on it do. Just imagine what the world would be without squid, or perhaps the more impressive Blue Whale or Wandering Albatross, or the more endearing Crabeater Seal (especially its cute pups!).

Economically E. superba is of considerable importance. A fisheries catch of 120,000 tonnes per year may perhaps not be much when compared to overall fisheries globally, but they are not small numbers either. A good many people and companies rely on these fisheries, aside from the food it provides.

It would also seem that krill lets us survive. Food webs are complicated processes, and a good many species — more than the simplified food web above depicts — are part of this food web. The illustration shows clearly that E. superba has an oversized role in driving the ecosystem processes in the Antarctic. The Antarctic is not isolated. Sea boundaries are not fixed, firm lines. The various systems and processes of the Southern Ocean interact with other processes, food chains and food webs in other regions of the ocean. Should the krill population decline dramatically, and thus the many species that rely on it, then this will have a ripple effect, the outcome of which is uncertain.

The outlook for E. superba

Unfortunately, the outlook is not too good. Krill populations have been declining since the 1970s. The reasons for that are not understood. But the decline is still ongoing, and is now exacerbated by other factors.

One such factor is overfishing. Krill Facts writes that until 2009 the harvest was stabilised around 120,000 tonnes per year. But since then it has been increasing to more than 200,000 tonnes. Overfishing is a real threat, illustrated by the example of the Mackerel Icefish, Champsocephalus gunnari, which used to be the most common fish in coastal waters in the Southern Ocean, but no longer so due to overfishing in the 1970s and 1980s. The quoted numbers of krill biomass sound impressive, but since so many animals depend on it, overfishing by humans can have great impacts on a system where Antarctic krill is the cornerstone of the system.

Another factor is increased ultraviolet radiation as a result from the ozone hole in the Antarctic and which has been reported as having caused a reduction of 15% in marine primary production. That means considerable lower amounts of phytoplankton on which krill depends to produce that amazing biomass.

And then there is climate change. The oceans have been growing warmer which will affect species when the limits of their temperature ranges are surpassed. Sea water is also becoming increasingly acidified due to an increase of absorbed CO2. The increase in acidity affects the production of phytoplankton negatively, the very basis of the system.

Because of these and other factors krill numbers are declining. Figures I have found include a recently updated entry in Wikipedia on krill fisheries which gives an actualised estimate of 379 million tonnes of krill, which would mean a decline of more than 120 million tonnes or 24% of the estimate of 500 million tonnes quoted at the beginning of this post. In addition, Cool Antarctica writes

The hole in the ozone layer appears to be on the mend; overfishing can be regulated, and the CCAMLR appears to have a positive effect; global warming however, is ongoing.

At the time of writing this post, news outlets reported on the agreement between USA and China on addressing emissions causing climate change. The reactions on the news vary quite a bit, but with many reporting that environmental organisations broadly welcomed the deal. Friends of the Earth however writes:

Although the rest of the article uses strong language, this formulation of “preventing climate disruption” is still an understatement. Climate change is already happening, and therefore the climate is already disrupted. What’s more, unless CO2 will be taken out of the sky, conditions will be changing or at least be different from current ones, for centuries to come. And aside from temperature changes — which fuel extreme weather events with potential disastrous consequences, sea level rises, and, for instance, declines in agricultural production — there is acidification of the oceans that already causes phytoplankton and carbonate dependent organisms such as corals to decline. This will in turn will have great disastrous effects on fisheries worldwide, and E. superba in particular. And as a consequence, whales, seals, fish, squids will find less and less food. It remains to be seen whether one or more other organisms can take its place to sustain the food web.

To avoid repeating links and references, here is a list of the principal sources I have gleaned information from for this post:

Friends of the Earth: http://www.foe.org